Does the mid-sized that clubs along feeling too big for it’s engine? How is the gas mileage in the Toyota Highlander Hybrid Limited compare to other vehicles in its class? Is the lift gate opening and closing speed a deal breaker? We put it to the test driving it around North Georgia and the South Carolina Piedmont region for a week. 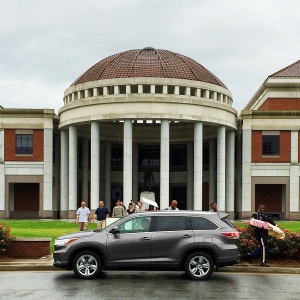 The Toyota Highlander Hybrid Limited features a standard 231 horsepower 3.5 liter V-6 and a 45-kW nickel-metal hydride battery for a net 280 horsepower and comes with Toyota’s Electronically controlled Continuously Variable Transmission (ECVT). The battery sends power to two motors, one driving the front wheels and the other the rear essentially making the Hybrid an all-wheel drive vehicle. Want to see battery power in action? There’s a screen as part of the infotainment system that shows which motors working and charging as it happens.

Weighing in at a stout 4800 lbs, the Highlander Hybrid Limited feels like the large vehicle it is. While we were aware of the size, the engine/battery/ECVT combination propelled the Highlander with a pleasant easiness and sure-footedness.

Cruise control worked flawlessly, maintaining our programmed speed over the rolling foothills of the South Carolina Piedmont. When truckers occupied both lanes as one slowly passed the other, the Highlander quickly, but smoothly returned us back to speed. 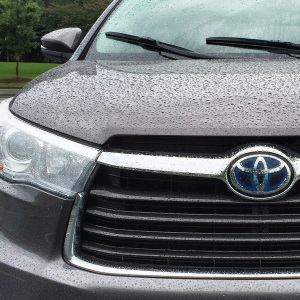 The Highlander began life US for the 2001 model year as a car based mid-size crossover and was seen as the less rugged counterpart to the truck-like 4Runner. Honda introduced the Pilot a year later beginning an arms race between the two Japanese automakers to seemingly build the most utilitarian box with the blandest appearance. That was then; this is now.

Having gone through one redesign in 2008 and an update in 2010, the current vehicle design was produced as the 2014 model year. Gone are the acres of boring sheet metal of the first generation, replaced by the creases and curved lines of the 2014. The new appearance is athletic. Roof rails curve along the shapely roof—Toyota refers to them as “aerodynamic”—adding a sleek appearance to other muscular features such as the large grill and wide overall stance.

The Highlander is a good looking vehicle. The five spoke Chromtec wheels that are standard on the Limited trim level went further to enhance the Highlander’s good looks.

Puddle lights in the side view mirrors illuminate the ground just outside the front doors and are a feature we were unaware of until we found ourselves using the light to negotiate a steep driveway under the cover of darkness in a hurried attempt to find a neglected stuffed animal at bedtime- just another way Toyota adds simple touches that bring ease to your life without having to actually think about them.

Side view mirrors fold away as they do on most modern SUV’s. This can be especially helpful when parking a larger SUV in a driveway with another vehicle.

We heard complaints from other reviewers that the power liftgate was a bit on the slow side. We found it an extremely useful feature, and could not imagine it going much faster when there is an ever-present possibility one of the kids could run around the vehicle as the liftgate was on the way up or down. And while there is nothing like the satisfying slam of a liftgate or door, we found that the speed was the perfect amount of time to walk from the drivers seat to the rear of the vehicle and vise versa.

The button to lower the liftgate was in the bottom of the door itself. After trying to close the liftgate a couple of times with both arms full of groceries after unloading at home, it was unanimously decided a button in the cargo area like that in the Dodge Durango would have been a nice feature. The ability to raise the glass in the liftgate by itself is super convenient—we found ourselves using it more than we used the full liftgate. 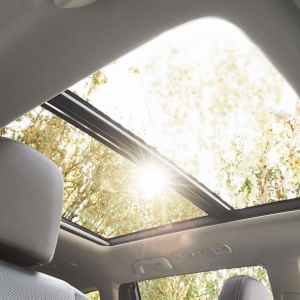 The Highlander Hybrid Limited’s interior exhibited the solid fit and finish we have come to expect from Toyota. While the materials did not scream luxury, their texture and appearance enhanced the overall feel of quality we got from the vehicle.

Limited trim level Highlanders feature second row captain’s chairs which provide plenty of legroom for both adults and children and are as comfortable as the front seats. A small table with two cup holders flips up between the two seats. When the table is in the upright position, it serves as a median both second row occupants can utilize. When stowed in the downright position, it gives pint-sized third row riders an alternative way to get into the third row without having to move the second row seats. Parents with children in both car seats and booster seats will understand how valuable of a feature this is.

The kids were thrilled with having their own chairs. A third row bench is standard on the Highlander and boasts seating for (and is equipped with seatbelts for) three. Two average size adults will likely be comfortable for not much more than a twenty to thirty minute ride. Our tween size tester did not want to spend much time on the third row, citing the roominess and comfort of the captain’s chairs in the second row, but it would be plenty convenient in a pinch.

Convenience and luxury features were abundant inside the Highlander Hybrid Limited. Second row passengers have manual window shades for their windows. A panoramic moonroof running the length of the cabin over the front two rows made for enjoyable stargazing and cloud watching.

Perhaps the most convenient feature was the Highlander’s front dash area which features a shelf that runs from the driver’s/steering wheel area under the console in front of the passenger was a thoughtful touch that provided a great deal of utility for cell phones, MP3 players, etc. The shelf is even equipped with a small pass-through for charging cords directly above the charging and USB ports in the center console.

Speaking of the center console, the armrest opened to storage that can only be described as cavernous. A medium-size handbag can easily be stored inside with room to spare. The console contained a removable utility tray that might have been able to hold some loose change and perhaps a short charging cord. The size of the tray was the least of our concerns. The tray was apparently designed to rest on natural indentations in the inside walls of the console. We could rarely get it to stay in place and when it did its hold was precarious.

The console is accessed via a roll-top lid other testers have complained about. It took us a total of two attempts to figure out the best way to get past the slight catch that held the two part lid in place. The usefulness of the console’s storage easily outweighed the short learning curve.

Cupholders in the front were adequate. The spring loaded arms inside the holders were not quite long enough to hold a large size paper coffee cup in place securely enough to keep us from worrying about spills during sharp turns. They will however easily swallow the largest of convenience store offerings. The two back rows have six cupholders at their disposal. 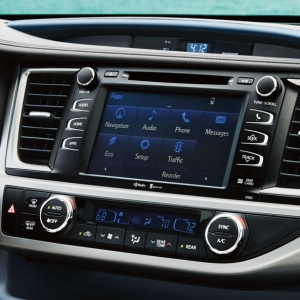 Front seats are heated and cooled and we took advantage of the cooling aspect readily during hot, humid summer days.

The Highlander’s infotainment system is controlled through an 8 inch high resolution touchscreen with split screen capability. The screen is where audio, hands-free phone connectivity, and navigation are controlled. We enjoyed how easy to use (more sensitive than some screens we have used) the screen was, with larger buttons along both sides of the screen to allow access to different categories of features.

The Highlander Limited package features Toyota’s foray into the infotainment wars known as the Entune App SuiteTM. This allows access to a few select apps and data services via your synced smartphone. The phone can be synced via Bluetooth or USB. The system relies on your phone’s data plan to function, but is not regulated by which carrier you have. The system was intuitive and fairly easy to use; however, we were a bit bummed when we first attempted to connect via Bluetooth (from the passenger seat) while on the go and learned the vehicle had to be stopped to do so. In fact, many of the actions available on the touchscreen were only able to be used when the vehicle is parked, even when there is a passenger in the passenger seat. 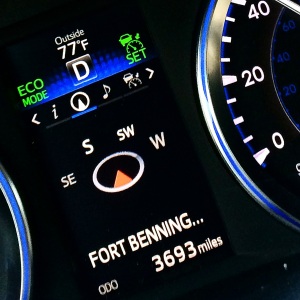 The touchscreen does not control the climate control system; however those controls are directly below the infotainment screen and are easy to see, access, and use.

We were pleased with the solid feel of the Highlander once we were on the road, and we did our best to put the Highlander through its paces. We drove along rolling hills, through a couple of urban areas, and to the beginning of the Appalachian Trail. The drive in the mountains saw us climbing a 25% grade. The powertrain had no trouble hauling is up the incline, and never gave any indication we were moving almost two and a half tons. We also experienced an assuring surefootedness when we got caught in a summer downpour. 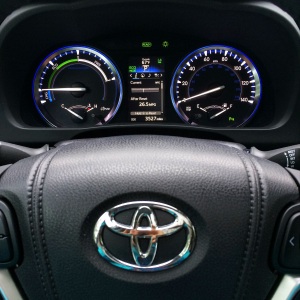 While researching the Highlander we found a couple of complaints other testers had- a lackluster transmission response and a numb feeling brake pedal. We did not experience either of these issues. The transmission kept pace with our driving and power was always at the ready. We felt the brake pedal was a tad heavier than we have been used to, but within a few minutes of driving we were used to the feel and experienced no other problem.

Heavy steering was another complaint of other testers but we felt that the steering was compatible with the size and weight of the vehicle, taking no extra effort while still reminding you that the Highlander is big enough to fit seven people.

The Toyota Highlander Hybrid Limited is a vehicle we’d buy. Our whole family loved the seating and storage options. All the knobs, dials, and buttons were exactly where you thought they would be. The fuel economy was surprisingly good and charging the battery didn’t take any additional effort. Whether you’re in the market for an SUV or a minivan, take a look at the Toyota Highlander. We think you’ll be pleasantly surprised as what you find.