While you’re busy driving your vehicle, your Toyota will be busy doing all it can to protect your family using advanced automated driving technologies.

With the inclusion of technologies including environment-mapping systems that can track objects on the road both day and night, 3D information displays that transform the ability to provide road information to drivers, and an advanced driving support system it is clear that Toyota is striving to become the U.S. industry leader in auto safety technology.

“Toyota’s vision is of a world without traffic fatalities, and these advanced connected and automated vehicle technologies hold the potential to revolutionize automotive safety,” said Seigo Kuzumaki (right), Chief Safety Technology Officer Secretary for Toyota Motor Corporation. “We are committed to bringing advanced active safety systems to market as quickly as possible and will make them accessible to a broad range of drivers.”

What are the technologies and how soon will they be fixtures in the Toyota lineup? Let’s break it down:

Debuting in North American last week, Toyota’s advanced SPAD LIDAR environment mapping and recognition system has been reduced in both size and cost, allowing it to be installed onboard the vehicle instead of the bulky roof mounts of traditional LIDAR systems.

First unveiled last year, the newest version of AHDA was show last week at the Toyota Advanced Safety Seminar. The system integrates three core technologies: Dynamic Radar Cruise Control (DRCC), Lane Trace Control (LTC) and Predictive & Interactive Human Machine Interface (HMI) and has been programmed based on actual traffic conditions in the United States allowing it to be operational at speeds of up to 70 miles per hour. These technologies help keep the vehicle in the driving lane and a safe distance from others on the road, all while travelling at highway speeds. The advanced Predictive and Interactive HMI promotes driver engagement by warning when the system will disengage and monitoring the driver’s hands on the wheel.

Dynamic Radar Cruise Control (DRCC) – According to Toyota, using a radar sensor installed on the front grill, “DRCC helps enable drivers to maintain speed and headway more comfortably while also reducing potential risks by helping to maintain a set margin to the preceding vehicle…[using] 77GHz millimeter wave radar to detect other vehicles traveling on the road and help maintain specific speeds and distances.” 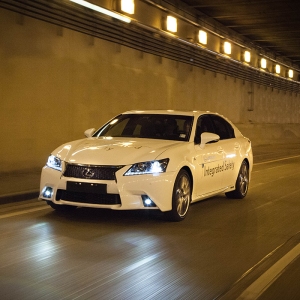 Lane Trace Control (LTC) – LTC assists the driver to easily and safely trace an appropriate path within the lane by using signals from the aforementioned wave radar.  These sensors detect lane markings on the pavement as well as forward vehicles, calculating an appropriate driving path and automatically adjusting the vehicle’s steering angle so that the vehicle remains within a lane within the desired buffer zone.

Predictive & Interactive HMI (HMI) – Predictive & interactive HMI will enable smooth transitions between automated and manual driving. Predictive HMI will provide advance “preview” information to the driver for, “upcoming settings where limited system support can be expected, predicted based on upcoming road geometry as well as historical sensor performance.” These lane-specific predictions are a result of merging data from an enhanced map, an automotive-grade global positioning system (GPS) receiver, and sensors.

Toyota’s 3D Heads-Up Display provides, “critical information including vehicle status, traffic conditions and road signs on the front windshield, rendering them in three dimensions without the need for glasses or other accessories.

Toyota expects these systems to included in their vehicles within the mid-decade.