A truck for people who don’t need a truck, but want a truck without all the other truckiness. Plus, it’s fit for families!

Exterior design of the all-new for 2015 Chevrolet Colorado is all truck. It doesn’t come off as just a mini Silverado, and it doesn’t look like a small truck. It looks to be the capable mid-size pick-up Chevy designed it to be. A square build is softened just enough with headlights wrapped just to the fenders. A distinctive grill and flared fenders contribute to a beefy, capable look.

Our tester, and all 2015 Colorado models featured corner steps in the rear bumper to ease access to the cargo bed. This is one of the more practical additions to pick-ups we have seen in a while.

Chevrolet tuned the Colorado’s suspension and steering with an eye toward refining the ride. The result is a mid-size truck that drives like a truck and handles like a truck but without a lot of the harshness and stiffness that sometimes accompanies the utilitarian nature of a pick-up. We felt the entire time we were in the Colorado we were in a mid-size crossover that happened to have an open 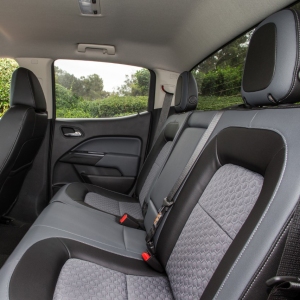 cargo area. First in its segment electric power steering gives the Colorado a light feel when maneuvering in close quarters, but a solid feel at interstate speeds. A tight turning radius contributes to the feeling of refinement Chevy sought.

Our tester featured the 4-door extended cab. All of the seats were firm yet comfortable causing us to comment more than once how we would enjoy taking the Colorado on a road trip. Rear seats were comfortable for a full-size adult with knee room to spare even with the front seat in its rearward most position. The center console provides a large storage area and armrest with ample real estate for two elbows. The center stack is easily reachable from both seats and has an upright design indicating the Colorado’s truck DNA. 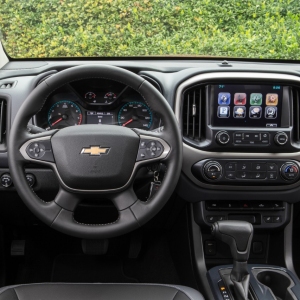 LT and Z71 packages come standard with Chevy MyLink infotainment systems with an 8 inch Color Touch screen. Our tester featured the upgraded navigation system, Bluetooth connectivity (including audio streaming and phone connectivity), and USB and auxiliary jack ports. The system was intuitive and took very little getting used to. The navigation system was dead on accurate even throughout some state park portions of our test drive area. The instrument cluster was made up of easy to read analog instruments surrounding a simple, easy to use 3.5 inch driver information screen.

The Colorado was a treat to drive. The 3.6-liter V-6 was mated to Chevy’s 6-speed automatic and produced a stout 305 horsepower and 269 lb-ft of torque. We had plenty of get-up-and-go and a scoot down an interstate on ramp had us at 65 mph before we expected it. The ride was pick-up solid without the stiff harshness of some trucks. Road conditions were communicated through the suspension and steering wheel without us having to know about every imperfection in the pavement.

The experience in the cabin was one of unexpected refinement. Chevy used sound dampening to include laminated glass and triple sealed doors to limit the intrusion of the outside world. Improved aerodynamics helped ensure road noise was just enough to let you feel connected to and involved in the driving process.