Imagine viewing 360° around your vehicle without having that view impeded by pillars, doors, and the roof. That’s what Jaguar Land Rover is working on.

In order to make this view possible, Jaguar Land Rover would embed a screen in the surface of each pillar inside the car. These screens show live video feed from cameras covering the angles outside the car usually obscured in the blind spots created by the A, B and C-pillars.

Like Ford’s Pre-Collision Assist System with Pedestrian Detection, the 360 Virtual Urban Windscreen would view pedestrians, cyclists and other vehicles displaying them on an, “advanced high quality Heads-Up display.” Movement coming from other road users would be shown to the viewer, “with an on-screen halo moving across the car’s virtual windscreen.” 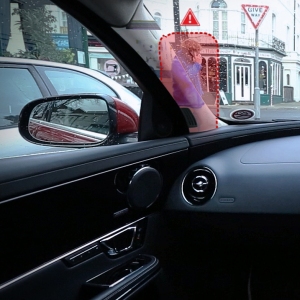 As the driver of a Jaguar Land Rover vehicle indicates that they will be changing direction by the driver moving, “their head to look over their shoulder during an overtake manoeuvre, or as the vehicle approaches a junction, the system would automatically make the left or right-hand side pillars transparent.”

The company hopes to increase your view even more by connecting the Windscreen to the Cloud. “By connecting the car to roadside infrastructure and businesses in the urban landscape, the Virtual Urban Windscreen could present information ranging from petrol station prices to the number of parking spaces available, so drivers won’t have to look for this information themselves.” Enhanced information delivery would also give drivers different types of directions, more like what they would get from humans, by telling the driver to turn at a landmark such as a restaurant or shop as opposed to just a road name.

Prefer to just follow someone who already knowns where you’re going to your destination? The Jaguar Land Rover team is developing Follow-Me Ghost Car Navigation, “which projects an image of a vehicle in front of the driver’s car for them to follow, turn by turn, to their destination.”

Both the 360 Virtual Urban Windscreen and the Follow-Me Ghost CarNavigation are part of a suite of new concept technologies that Jaguar Land Rover is developing to reduce the potential for accidents. There is no word on when these systems will be available in vehicles.