Can a full-sized luxury sedan be a fun drive that youthful families are looking for or is it best left to the adults that have waved goodbye to their brood after dropping them off at college? We tested the 2015 Lexus ES 300h to find out.

The 2.5-liter 4-cylinder engine works with Lexus’s High Output Permanent Magnetic Electric Drive Motor to make a total 200 horsepower. Power runs through an electronically controlled continuously variable transmission which still takes us a little while to get used to. With the transmission constantly looking for the perfect gear ratio, RPM’s fluctuate and often–especially during acceleration–do not sound as you expect them to. When we realized the CVT contributed to full-size sedan fuel economy in the low 40’s, we happily accepted the unusual revving.

The ES sedan was one of the two vehicles in the original Lexus lineup in 1989. It began life as a compact sedan, eventually moving up to its current full-size category where it plays the elegant luxury sedan to the GS’s sport luxury sedan and entry-level luxury to the LS’s flagship status.

In vehicles, luxury is often communicated through subtlety. The ES 300h features all the styling cues that make the brand’s entire series of vehicles head-turners, but still manages to very sophisticatedly communicate its hybrid powertrain with exclusive split-five-spoke wheels and a lip spoiler as well as blue accented front and rear badging as well as tasteful Hybrid badges on the rear doors.

The ES features a coupe-like roofline that not only gives the vehicle a strikingly attractive profile, but also contributes to aerodynamics with a low (0.27Cd) drag coefficient. Lines are soft with curves instead of creases and lend an air of elegance without a bit of stodginess.

The inside of our ES300h was awash with materials designed to carry the luxury aesthetic inside. The dash was wrapped with black NuLuxe faux leather and was trimmed with bamboo accents that added a rich appearance. The seats were of the same NuLuxe material trimmed in leather with the bottom and back perforated for heat and ventilation. 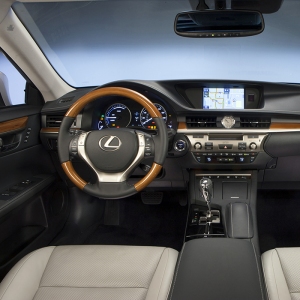 While the broader expanses of dash and door materials said luxury, the controls and console said modern. The appearance was clean and almost sleek with an analog clock in the center bringing a bit of old world luxury. Controls were where they should be and were easy to use. The fit and finish of the materials was solid and exactly as you would want.

The seats were supremely comfortable. An hour or two in the seats left us wishing we had reason to take a longer road trip. The front 10-way power seats seemed infinitely adjustable. The passenger seat being equally adjustable as the driver’s was a nice touch. The steering wheel tilted and telescoped at the touch of a 4-way button. Seat and wheel settings could be stored for up to three drivers.

The dual automatic climate control worked flawlessly. It was the ideal system for an always warm and always cold duo of driver and passenger.

A couple of niggling details kept the ES from perfection. The NuLuxe leather replacement felt right and looked right, but didn’t smell right. Every time we got in we expected to smell leather, and were consistently disappointed. The leather and bamboo trimmed steering wheel was lovely; however, the wood was a little too grippy. Letting the wheel slide through our hand to return its center position after a turn saw us more than once having the wood portion of the wheel stick in our hand where the leather was smooth. This is nothing we couldn’t get used to after more than a week in the car, but it was just a reminder the ES is not really a driver’s car.

The center console in the ES Hybrid is, in a word, elegant- wide enough for two elbows to rest comfortably without feeling intrusively large. It housed a modern looking drive mode selector knob, seat ventilation and heat controls, a remote touch controller for the infotainment system, and two cupholders. Each cupholder was concealable under small spring-hinged doors that made the console look complete when closed. 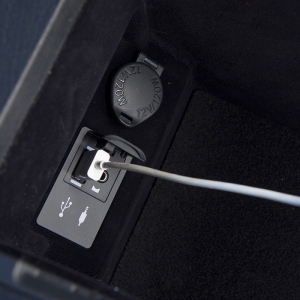 An 8″ VGA screen serves as the control center for the Lexus Enform infotainment system featuring Destination Assist and App Suite. The screen is nestled in the dash where it is easily visible to driver and passenger without the driver having to move his eyes to far from the road. Glare is not an issue with the screen even with the sunroof open with midday sun pouring in.

The system allows smartphone connectivity via Bluetooth and USB. A single DVD/CD player is also part of the system. The USB outlet charged our iPhones rapidly.

A console mounted remote touch controller controls the cursor on the infotainment screen. The remote consists of a toggle that moves the cursor. A Home and Menu complete the simple system. The simplicity of the system and the ergonomic hand rest made the controller a breeze to learn and use.

The ES 300h was an overall enjoyable drive. Lexus managed to balance a comfortable ride that was not soft or squishy. They also engineered a drive that makes the driver feel connected to the driving experience without the direct communication expected of a sports car. That lack of direct communication was also a drawback for us. The car felt like a luxury conveyance as opposed to a true driver’s car.

Cruise control was as good as any we have experienced with the actual speed staying within one to two miles per hour of the set speed regardless of the grade we were driving on. The vehicle’s safety technology operated as expected with the Dynamic Radar Cruise Control being easily turned off so the vehicle could operate using the standard cruise control option that we prefer.

The ES performed exceptionally well in the rain. We had the opportunity to put the car through its paces on some winding country roads in a pretty serious early April downpour. Deep puddles were targeted intentionally and the ES tracked straight through all of them with no hydroplaning or deflection from our intended path.

The Lexus 300h is a true luxury vehicle. It looks and feels rich. There is room to spare in the front and rear seats. While it isn’t going to trip anyone’s fun-to-drive scale, it is comfortable vehicle that earns its spot in the crowded luxury sedan category. 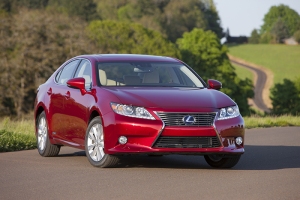 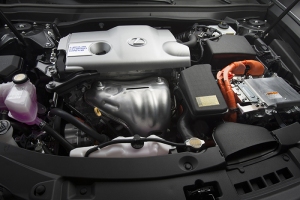 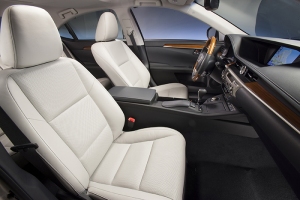 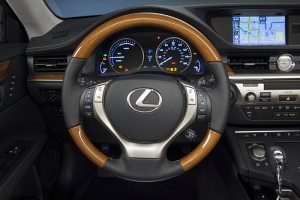 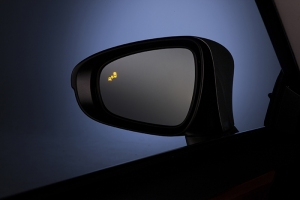 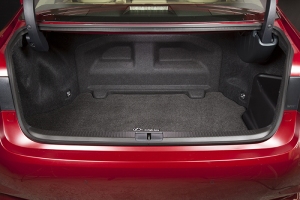 all photos courtesy of Lexus