Spending 30 minutes driving the 2015 Acura MDX can tell you a lot. First and foremost, it feels like a car more than an SUV but, when it comes to seating… Well, you’ll just have to keep reading.

We really enjoyed driving the 2015 Acura MDX. The mid-size crossover demonstrates every bit of its Honda heritage in that the engine, steering, and braking are responsive and quick. Tell the vehicle to do something and it does it immediately with no fuss. We did experience one niggling issue: the MDX handles smooth roads like a champ, but all but the smallest bumps give the driver a sharp alert through the chassis. This wasn’t an insurmountable obstacle and is something we likely would not have noticed if it wasn’t for the level of refinement throughout the rest of the vehicle.

The easy to use infotainment system in the MDX is made up of three screens. A lower screen Acura calls the On Demand Multi-Use Display is mounted in the center of the stack and contains the primary controls for the HVAC and audio systems as well as for smartphone connectivity. Analog HVAC controls are mounted directly below this screen.

An upper screen at the top of the stack is high enough to be visible at a glance and contains information relevant to the lower screen’s controls or independent of it. The navigation system is viewable on the upper screen.

The third screen, the Multi-Information Display is mounted in the instrument panel. Information displayed on this screen includes tire pressure, trip computer, fuel economy, etc. It can be changed via steering wheel controls and in some trim levels can display turn-by-turn navigation information.

It’s a lot of screens.

The MDX is a contender for best looking mid-size crossover. Its front end is distinctly Acura with the wide, brushed metal strip across the grille and the stylized ‘A’ in the center. LED’s festoon the whole exterior with the Jewel Eye TM LED Headlights Acura has recently grown so fond of adding to the distinction.

Acura calls the MDX a three-row crossover. We took to calling it a two-and-a-half row crossover. There is a third row of seats in the cargo area of the MDX. The only issue is the designers and engineers failed to equip that row with legroom. It wasn’t that there was a little legroom, there was virtually none- even worse than what the 2015 Nissan Rogue offers.

Cupholders were unexceptional with each of the two inhabitable rows having access to one each. The center console storage was impressive. A large lower section could hold a medium-sized purse while an upper area that could be accessed via a sliding tray-like door above it. The upper storage area was flat and a tad shallow, but could easily hold a smartphone or two and loose change. 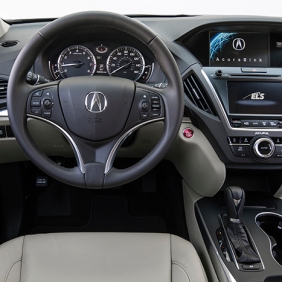 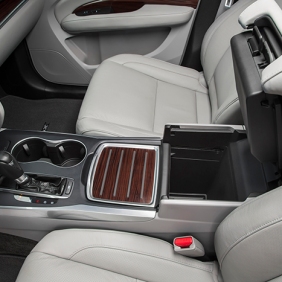 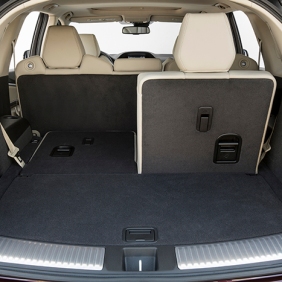 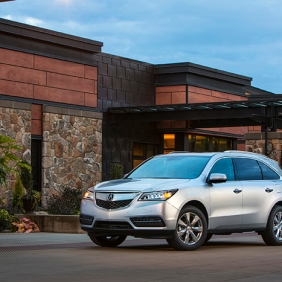