Let’s be honest, the last time we drove a Prius, we weren’t all that impressed. Has Toyota made improvements to its line to boost the appeal of the Prius to families with the Prius V? We put it to the test with a week’s worth of errands and commuting to find out.

Under the Hood
The 2015 Prius v comes standard with a 1.8-liter 4-cylinder gasoline engine paired with an electric motor using Toyota’s Hybrid Synergy Drive to produce a net 134 horsepower. Hybrid Synergy Drive technology mates the gasoline engine and electric motor so they work together and separately based on what the vehicle determines to be most efficient. That combined power runs to the front wheels through an electronically controlled continuously variable transmission.

Upon approach, the Prius v looks exactly like what it is, a Prius. It is ugly enough you just know it has to be fuel efficient, and with its pointy front end it darn well better be aerodynamically efficient. We always felt the back end of the Prius looked like a bit of an afterthought. As you approach the rear of the Prius v, however, it looks like an intentionally designed, almost nice looking 5-door wagon.

Toyota has tweaked a few things around the outside of the Prius to make it fit with the overall design direction the company is heading. The front is taken up by a narrow v-shaped grille portion just below the hood. It also features the dark frowning grouper-like opening below Toyota designers insist on incorporating into their cars lately.

Our tester, the Five Model had fog lights integrated into the lower opening which was bookended by some LED daytime running lights incorporated into the front of the front wheel wells. These lighting options were a welcome distraction from the gaping blackness that is the façade of the Prius and served to dress up the appearance a bit.

Another thought that struck us when we first laid eyes on the Prius v was just how small it looked. It looks short from front to back and from top to bottom. It looks like a small car. 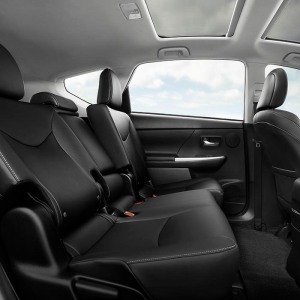 The idea the Prius v is a tiny car ends as soon as you open the door and peek inside. We were immediately struck by the amount of interior real estate before we even got into the car, and even more so once we sat inside. The Prius v is surprisingly roomy in the front and rear seats. There was plenty of headroom, leg room, and hip room all around. We don’t recommend trying to squeeze three adults (or anyone with a double digit age) into the rear seat. Two are plenty comfortable.

Along with people room, cargo room exceeded our expectations as well. It was in line with the roomiest compact 5-door. Other storage throughout the Prius v was pretty much like or dislike with very little middle ground. The passenger side dash featured two bins which we liked. The upper bin provided plenty of room for sunglasses, chargers, and pretty much any other traveling necessities that might need to be stored. A lower bin appears cavernous at first glance till you recognize it is almost full of the reference section that is the modern owner’s manual(s).

There were two front cupholders which fell firmly into the dislike category. One, presumably for the driver, is set into the center console. It is solidly built and holds the average cup or bottle pretty well. Our issue with it is its placement. Tall cups and bottles get in the way of reaching for the center stack, and while this is not a huge problem, the fact that no other vehicle we have driven seems to have this problem serves to make it a tad bit more annoying. 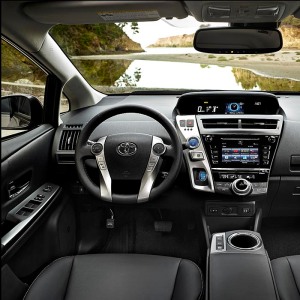 Even worse was the placement of the front passenger cupholder, a little collapsible number that pops out from under far right HVAC vent that effectively blocks the airflow. Cupholder gripes continue to the back seat. Collapsible cupholders spring out from the rear of the console which is a convenient feature when you wish to stow them, but the convenience ends there. The cupholders are mounted so low it was difficult for our tween testers to reach them. A smaller kid in a car seat or booster is without hope.

Fit and finish were solid with no annoying squeaks or rattles to accompany the ride. Seams in the surrounding soft touch materials were tight and demonstrated a very Toyota-like attention to detail in the assembly process. The materials in our tester were what we would expect from any other vehicle in its $35,000 range.

As with other Prius models, the instrument cluster and driver information screens are located at the top of the center stack and integrated into the dash. This takes some getting used to, but doesn’t take as long as you might think. With the instrument cluster integrated into the top of the dash, the rest of the audio, HVAC, and even transmission controls are part of a sleek modern looking wedge that bisects the dash.

The centerpiece of the wedge in our Prius v was a 6.1” touchscreen that serves as the control center for Toyota’s Entune app suite and navigation. The touchscreen is sharp looking with blues and whites serving as the primary contrast to a classy black plastic surround. Easy to use, intuitive HVAC controls are mounted below the screen with a control lever for the electronic transmission is to its immediate left.

The transmission control, like most things, is simple to use once you get used to it. Most vehicles with automatic transmissions have you move the gear lever to your selection and leave it there. In the Prius, you make your selection by moving the selector to the chosen option and letting go. The lever rebounds back to a neutral position while leaving the transmission in your selected gear. Park is selected via a button above the shift lever. These are not daunting issues, but do take a little getting used to. The shift lever is easy enough, but up to the day we returned the Prius v one of our testers consistently tried to find Park with the shift lever.

The center stack ends below the HVAC and the storage begins. Auxiliary and USB outlets sit at the top of a reasonably large open bin that disappears into the base of the center console. The console provides a medium-sized storage bin with topped with an armrest lid. The armrest was not the softest material we have rested our elbows on while motoring, but was comfortable enough for commuting.

Overall, Toyota managed to capture a modern aesthetic without making the Prius v look so futuristic it scares of technologically challenged buyers. The driver information center features the same crisp blue and white contrasted with black of the infotainment touchscreen. It allows the driver to monitor battery charging, fuel efficiency, diagnostic information, and to receive information on making the drive more efficient.

Toyota addressed two of our main complaints with last year’s Prius in the driver information screen. The old one had a green digital data display that made us feel like we were driving in DOS while other hybrids we have driven were all Appled out. The second complaint was with a feature that had a circle hover over the selected option on the driver info screen when a steering wheel control was used. It was a little annoying and served no real purpose we could figure out, but is now no longer an issue. 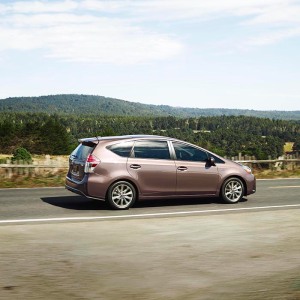 A tire pressure warning light came on while we were driving, but there was no way to figure out from the driver info screen which tire was the problem, or what the problem even was. This was an oversight in a vehicle that is so good about providing so much other information. We also had the infotainment system lock up on us. Everything on the screen stayed illuminated and looked as if it should be working, but nothing was. The screen was not sensitive to touch, and the analog buttons that flank the screen did not work. We still don’t know the cause of the freeze. The only solution we could find was to turn the car off completely.

The Prius v drives like a nice tight little compact. It goes where you point it and even manages to be a bit perky. The turning radius is fair and the car is responsive enough to move in and out of congested roads and parking lots. The glowing praise pretty much ends when you reach about 55MPH when the little fella starts to show his limitations.

Acceleration becomes a chore at highway speeds. It’s the racehorse that just doesn’t have any more to give no matter how hard you flog it; and, we certainly felt like we were flogging it to get up to highway speeds every time we were on a highway access ramp. The acceleration woes are magnified when going up a steep hill. It’s the little engine that doesn’t want to

We are big fans of hybrid and EV technology when it is done right and carry a little bias toward hybrid vehicles. As a result, we want to be big fans of the Prius v. In the confines of city streets and traffic we are. Leaving behind that urban setting though and venturing our into a world of highways and 65MPH speed limits would have us wanting to leave the Prius v behind as well.

all images courtesy of Toyota