Honda has always been one of the go to manufacturers for a solid vehicle that is easy to drive and will last forever. Intuitive design has also been a hallmark of their vehicles; however, we have noticed a trend in the most recent models where that design is interrupted by a quirky element that doesn’t fit in, or just doesn’t make sense. We set out with the new for 2016 10th generation Civic to see if it lived up to its reputation and our expectations.

We spent our week with a Civic 1.5T Touring sedan—Honda currently offers the Civic as a couple or sedan. The sedan is available in three trim levels with two engine choices. The LX features a 2.0-liter 4-cylinder engine good for 158 horsepower and 138 lb-ft of torque while EX and Touring models get a turbocharged 1.5-liter 4-cylinder that produces 174 horsepower and 162 lb-ft of torque. All models are front wheel drive. 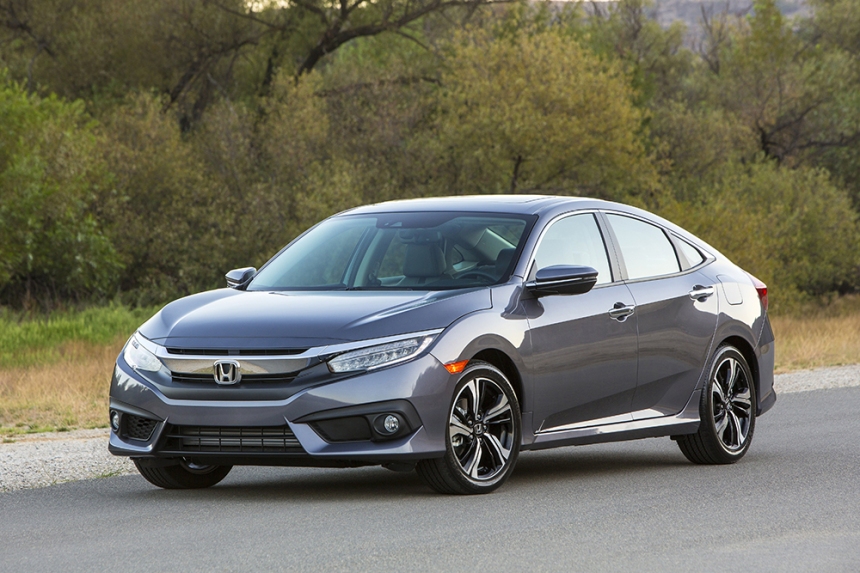 The Civic has been a staid competitor in the compact car market for decades, and apart from some boy racer modifications, have been dressed in sheet metal that communicated stolid reliability. They looked every bit the safe choice dads buy their daughters when they go away to college. That changed in 2015 when the Civic grew up.

The 2016 model is really good looking. Creases shape the sides and hood enough to give a sporty element along with slightly bulging wheel wells. The back glass slopes like a fastback and is reminiscent of some premium full-size sedans. The LED headlamps, standard on the Touring package, give a crisp modern edge to the front. Honda is particularly proud of the tail lamps that form a C on each side of the back and complete the modern look. 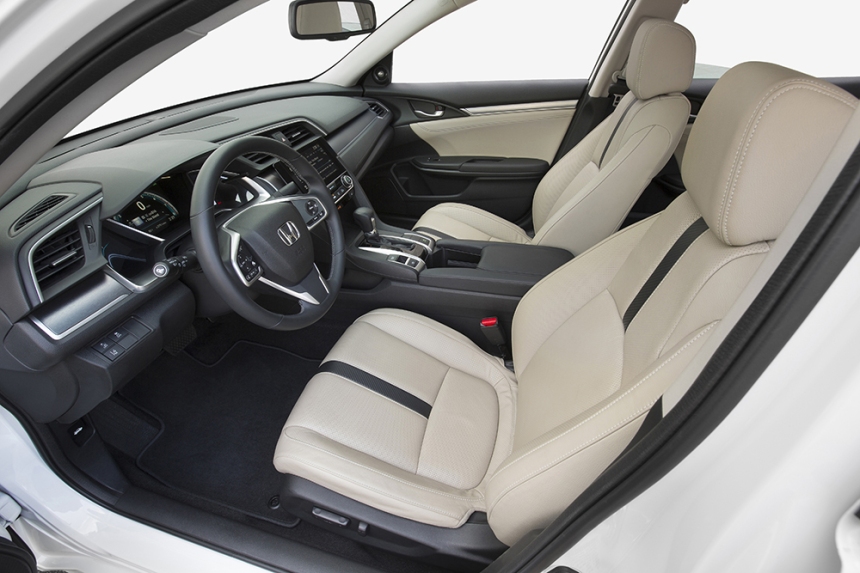 The Civic started life as a compact sedan, and like just about every other manufacturer, Honda has stretched the category so today’s compact is yesterday’s mid-size. This is most evident in the Civic sedan’s expansive interior. Comfortable, supportive seats allow for plenty of legroom, headroom, and hip room. Two adults and two tweens were perfectly comfortable on a journey of a couple of hours. Said tweens also mentioned their appreciation of the rear seat cupholders. The Civic, like most other small vehicles, houses their rear cupholders in center armrest. The Civic offers a solid armrest as its cupholder base. Too many other vehicles they have helped test provide very little stability for rear cupholders and leave them worried about spills.

The grown up design of the exterior carries over into the interior with an aesthetic that looks too expensive for a Civic. This begins with the instrument panel which is a fan-shaped 7” digital display Honda calls their Driver Information Interface (DII). The center, and most prominent, feature of the DII is a dial tachometer that forms an arc over a digital speedometer and a small customizable information screen. Temperature and fuel gauges flank the center display. 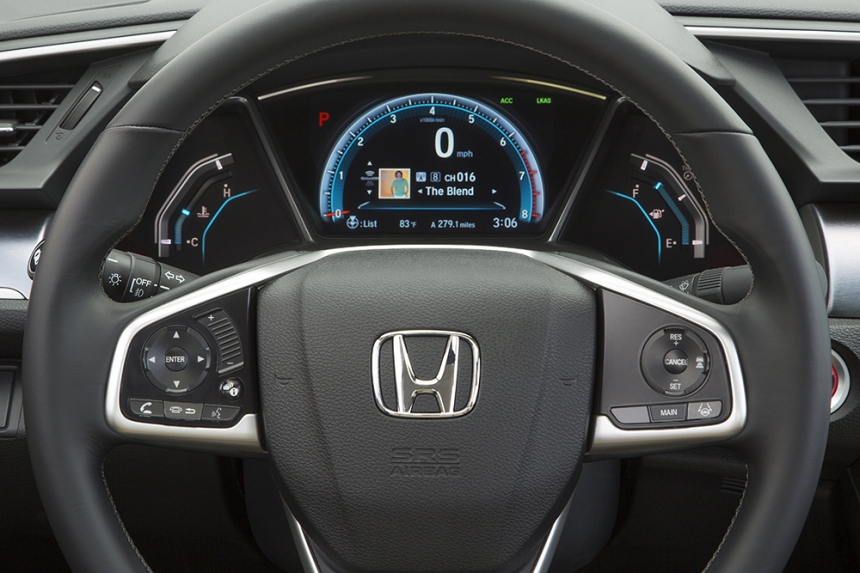 Steering wheel controls allow the driver to customize the DII information which includes trip computer, diagnostic information, systems status, etc. There are also Bluetooth, audio, and cruise control system controls mounted on the wheel. This is a lot of information in a small space and Honda manages admirably with mostly easy to use and understand controls. One fun element is the volume control for the audio system. Drivers can run their finger up and down a small panel in the wheel and volume moves up and down along with it. Tabs on each end allow the driver to bump the volume up and down for a more analog feel.

The infotainment screen mounted near the top of the center stack is a brilliant 7” beauty that manages, like the wheel, to jam an awful lot of control into a smallish space. Redundant HVAC controls are mounted below the screen and consist of a few buttons and two knobs that are as easy to use and understand as we expect from a Honda. 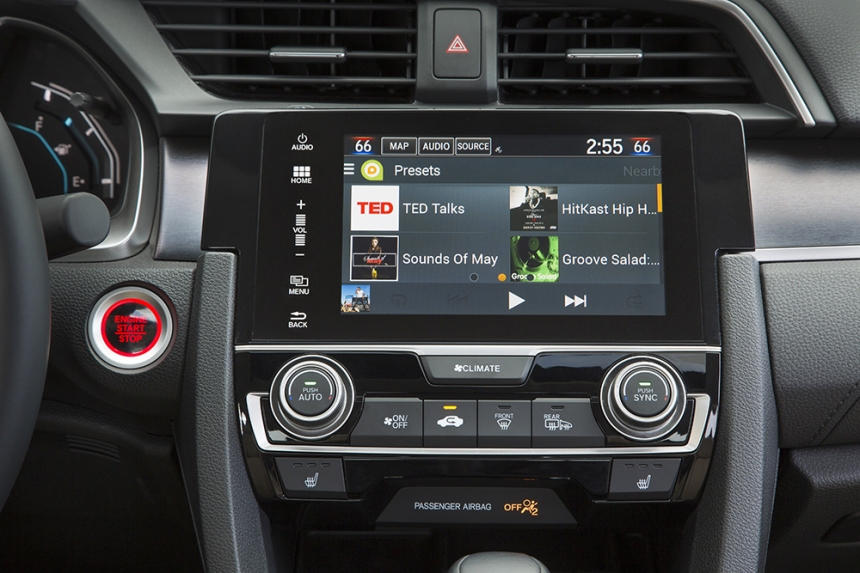 Apparently, as seems to be the case lately, Honda designers were not satisfied with all around easy to use, straightforward controls and decided to throw a curveball. There are no audio controls apart from the touchscreen and the touchpad on the wheel. A portion of the screen is a slider similar to the volume control on the wheel as it allows the user to change the volume by sliding their finger up and down to make changes.

The volume control is easy enough to use and its function is obvious at first glance. Our issue with it is it serves as the only stack mounted volume control. The front seat passenger found it awkward to use, and any attempts to change the volume on rough surfaces caused dramatic changes in volume. We also found ourselves changing the driver’s temperature setting more than once when trying to adjust the volume. While we would likely get used to operating the system as it is if we drove the Civic exclusively, the lack of volume and tuning knobs proved to be a pain. 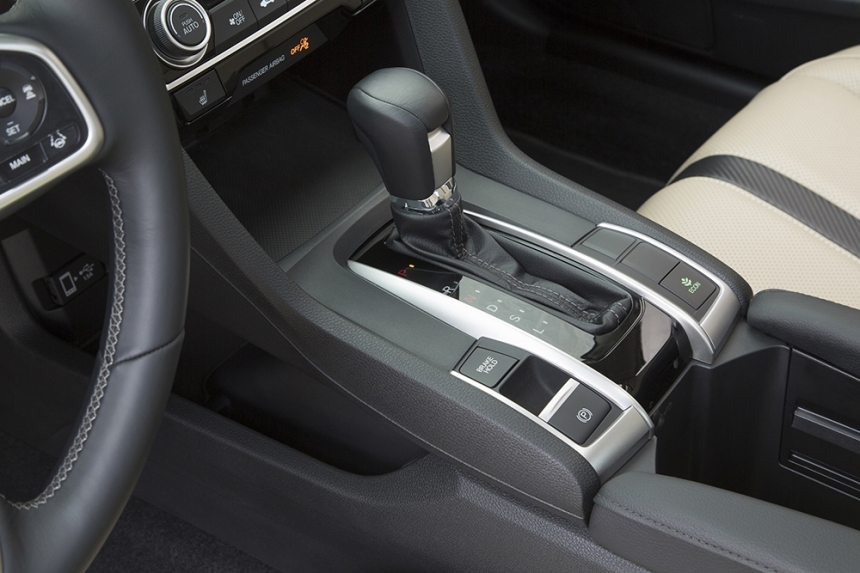 Driving the Civic was everything we expect from Honda. Steering was crisp and direct. The wheel and pedals provided just the right amount of feedback over the most potholed surfaces. The little turbocharged engine provided surprisingly good acceleration with no noticeable lag. Our experience has been Honda’s automatic transmissions have always had a rough first shift. The continuously variable transmission that is standard in most trim levels didn’t have that problem. The transmission was smooth enough we rarely took note of it.

We really enjoyed our time in the Civic. It is easy to drive, easy to use, and no doubt continues Honda’s bulletproof reliability. With that reliability and fuel economy in the low 30’s, we wholeheartedly support the decision to buy a Civic. With a sticker price among the top in an increasingly crowded compact car market, we wholeheartedly support the decision to shop around.