Since its humble beginning a quarter century ago as an underpowered box sitting atop a Ranger chassis, the Ford Explorer has become one of the most popular mid-size SUV’s on the market. In its fifth generation (with a facelift for 2016) the Explorer now does duty as a three row family hauler, a commercial truck, and the increasingly popular Police Interceptor Utility. When we got the chance to drive the top-of-the-line Explorer Platinum recently we were curious to learn if such an all-around workhorse could be dressed up to be a luxury crossover.

Go to the Build & Price feature on Ford’s website and tick all the boxes for all the options available on the Explorer and you get the Platinum. The engine you will find there is a 3.5-liter EcoBoost 6-cylinder that’s good for 365 horsepower and 350 lb-ft of torque. We were already fans of the EcoBoost, and quickly became fans of Explorer Platinum’s power plant.

We tried to come up with a word to describe the exterior design of the Explorer Platinum, but had a tough time doing so. The satin chrome finish on the mesh grille works with the chrome cladding along the door sills and the exhaust fascia to dress up the Explorer for an element of sophistication. Creases along the broad sides, LED lighting, and fog lamps connote sportiness. The 20” wheels with the contrast of bright, polished aluminum and dark painted pockets put a modern spin on the entire aesthetic that brings it all together. It’s like seeing your favorite athlete in a well-tailored suit–it may not be what you are used to, but it definitely works.

Inside the Explorer is a solid performer. The seating was everything you want it to be. It was darn near perfect. We could see ourselves happily road tripping in the Explorer. One feature we have enjoyed the most in any vehicle was the Explorer’s power-adjustable pedals (standard in Limited and Platinum trim lines). Manufacturers boast of 10, 12, and even 18 way adjustable seating. They are all pretty much going to put you in exactly the position you want for maximum comfort. Adjustable pedals are the cherry on that sundae.

We felt the steering wheel looked a little busy. It accessed and allowed us to customize all the driver information we wanted, but the large collection of controls on the horizontal spokes seemed a bit much. They looked a bit dated too. The 4.2” driver information screen is part of a fully digital instrument cluster. Ford’s driver information along with its SYNC infotainment system is one of our favorite combos. 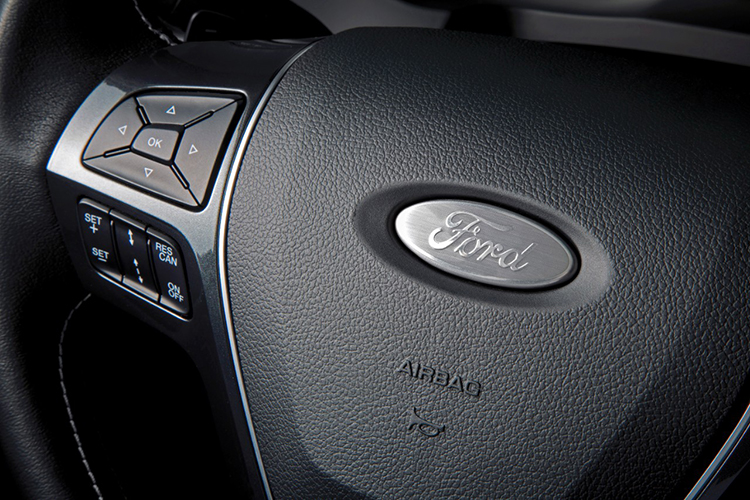 The Explorer Platinum has all the technology we have come to expect from top-of-the-line crossovers (including front and rear cameras, park assist, blind spot information system, etc.) and manages to be one of the most intuitive and easiest technology group and infotainment systems to learn. The facelifted Explorer retains one of our favorite Ford interior features, their four-in-one infotainment screen. Four systems can be monitored at once on the 8” LCD color touchscreen.

The infotainment screen serves as the centerpiece of a dash that is free of frills and has a clean, sophisticated appearance. Redundant analog controls for the HVAC and audio systems are mounted below the screen in a matte plastic square that contributes to the clean appearance, but is one of a couple of pesky elements of the interior we just could not get past.

Some of the HVAC controls are in the form of small buttons set into each side of that panel. They are glossy black and look cheap . They also don’t match the smooth, matte oblong rocker switches and buttons that make up the rest of controls. The black buttons look like an afterthought, or maybe the ones the designer really wanted didn’t ship in time so they made do.

At the bottom of the stack and the front of the console is a storage bin we found to be a practical size—other designers could learn from this. The rest of the console has two cupholders and an under-the-armrest storage bin that were also useful. Our only other real issue with the interior was the console mounted shifter. It was tall and awkward. We felt the Platinum trim level was the perfect space to include a much smaller electronic transmission control, or at the very least something that was not as in your face and demanding to be noticed.

The Explorer Platinum, with its EcoBoost V6 and the 6-speed SelectShift automatic transmission worked together to give the Explorer the kind of power expected from a luxury crossover which is what the Platinum with all its bells and whistles is trying to be. The ride was smooth and comfortable, but not in a way the driver felt out of touch. Driving and braking were not sports car dynamic, but were direct in communicating conditions to the driver and the driver’s input to the road. Acceleration was excellent whether starting from a stop or making a last second decision to pass on the interstate.

Ford uses words like refinement and upscale in their marketing to describe the Explorer Platinum. We drove it before we tested couple of other crossovers that use similar words and have names like Lincoln and Denali. We found ourselves longing for the Ford. It was more comfortable, put together better, and much better looking. We think Ford hit their target.