Can you have your toy and haul a family too? The 2015 Toyota Tundra TRD Pro looks like fun, and it is. But, is is practical? We spent a week driving around town in the truck, running errands, picking up a load of mulch, and ended our week tailgating at the Shaky Boots Music Festival. How did it hold up during “a week in the life?” Here’s what we discovered:

The 2015 Toyota Tundra TRD (Toyota Racing Development) Pro comes standard with a 5.7-liter i-FORCE 8-cylinder which produces a healthy 381 horsepower and 401 lb-ft of torque. The engine is mated to a 6-speed electronically controlled automatic transmission sending power to all four wheels.

The truck uses a dual exhaust system designed to help maximize engine power with the added benefit of a delicious roar that stopped more than one passerby in their tracks. We even caught the AT&T service tech with his mouth open, staring at us as we passed. It’s no wonder the truck was even named to AutoGuide.com’s Top 10 Cars With the Best-Sounding Engines.

The Tundra TRD Pro is a big, beefy truck. It is tall (the mast antenna clipped more than one clearance indicator entering a parking garage), just about 19’ long, and looks aggressive—aggressive like it wants to take off and drive over something. The truck doesn’t just look like it wants to take on the world it looks capable of doing it.

As a part of the TRD Pro Series the Tundra TRD Pro is only available in Super White, Black, and a color Toyota calls Inferno. Our test truck came in the Inferno which is a fantastic orange. Standard to the Tundra TRD Pro were 18” black alloy TRD wheels which provided a perfect contrast to the hey-look-at-me color.

Like all the vehicles in Toyota’s TRD truck lineup the Tundra was equipped with black-bezel headlamps and an over-sized TOYOTA grille. Unique to the Tundra TRD Pro was a TRD Pro stamp in the side of the truck bed that somehow made the Tundra look even more muscular.

The inside of the Tundra TRD Pro is as big as the outside. The center console has a storage bin big enough to hold hanging file folders, and we suspect the grooves at the top inside of the bin are for that purpose. A nice feature of this bin was a felt lined tray at the top that was just deep enough to hold a smartphone, charging cords, and some pocket change.

HVAC controls were made up of three hefty knobs that were a handful and felt luxe-utilitarian (if that’s not a term yet, it should be). The console-mounted shift lever was also truck appropriate.

Fit and finish inside the truck was perfectly Toyota-like. Materials felt durable and gave the sense the Tundra could take a beating, but were a high enough quality they didn’t feel like a wash-and-go off-roader. One of the materials in abundance was a plastic made to look like brushed metal. We liked how this added to the overall design aesthetic, but were puzzled by its absence around the shift lever. A narrow piece of plastic trim around the lever housing seemed to us as if it should have been this subdued plastic; however, it was a chrome-looking plastic that caught sunlight and regularly created the most annoying glare.

The seats were large too, and gave the appropriate feel of piloting a land barge. One issue with the seats was the lack of side bolsters. While the driver could use the dead pedal (the unsung hero of any vehicle) for stability, passengers were left to slide around on the massive real estate allotted their bums. The kids were ok with this feature, but more than once our front seat passenger was left clamoring for a hand hold during sharp turns, roundabouts, or quick stops.

The Tundra TRD Pro comes standard with a 7.9” touchscreen infotainment screen integrated seamlessly into the center stack. Typical Toyota simplicity rules in easily navigable controls surrounding the screen. Easy to read, but not too large buttons line each side of the screen and give quick, on-touch access to main infotainment categories. Volume and tuning knobs are just above the screen and within reach of the driver and front passenger.

The instrument panel has a 3.5” driver information screen framed by large, analog speedometer and tachometer. Information accessible via the driver info screen includes odometers, trip meters, and shift position indicators. Once again, everything is typically Toyota and the screens operate and look similar to the 2015 Camry.

While behind the wheel of the Tundra TRD Pro, you are never insulated from the understanding you are in control of a beast, but this beast is a well-mannered chap. The TRD Pro Series of vehicles are designed to give the best in off road performance straight from the factory while making the vehicles reasonably easy to live with as a daily driver. As far as the Tundra entry is concerned, we say mission accomplished.

The on-road ride is surprisingly smooth and maybe just a tiny bit refined. If you need to nudge the throttle a bit more than normal down an on ramp, the power and torque are evident and seem to be limitless. Bumps in the road are absorbed and communicated to the driver just enough to keep you informed. The ride was never jarring even when we spent a few minutes exploring a construction site driving across some impressive wallows and humps left by equipment far heavier than the Tundra.

The Tundra TRD Pro was a fun vehicle to drive. It is fun to be seen in. It is fun to drive with the windows down and audio system off while listening to the head turning chorus rumbling from the exhaust. If we ever find ourselves in the unlikely position to need off-road prowess with daily driver livability, we know who to call. 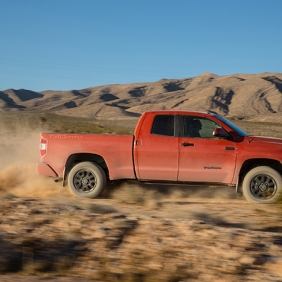 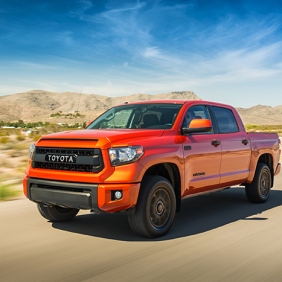 all photos courtesy of Toyota